Our community will abide by the trick or treat times set by Frenchtown,  6:30 – 8pm. Don’t forget to bring the kids by the Pavillion for their goodies and adults, don’t forget to have a donut and have some cider, coffee, or hot cocoa.  We are very excited to share Halloween with you. Happy Halloween and happy haunting 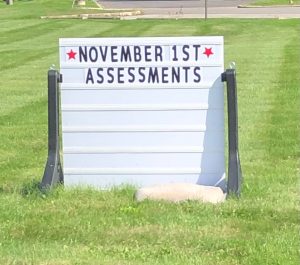 Previous. meeting minutes were approved by all

Update from previous meeting- The office lighting transfer from florescent lighting to LED was completed. The old flag being properly disposed was discussed at the previous meeting, Tony Spear volunteered to take the flag and have it appropriately disposed of. Thank you Tony Spear for taking care of the flag. Mr. Spear also volunteered his time and sprayed the baseball diamond and by the lighthouses up front with weed killer.

There has been talks of acquiring the legal by-laws for Detroit Beach. Finally it was narrowed down that we had to contact the Monroe County Registrars Office. They were contacted and relayed that they did not have the man power to look for them and that someone will have to come up and dig them up. The president will be. taking on that task.

We recently were informed that there are parks at the end of every street, at the waters edge. Nick, V.P. and grounds has begun marking those parks. with signs, table and trash can, starting on 2nd st. Although it is not much, it is something for the residents to enjoy. We need more volunteers for the community.

Previous contracts for lawn, snow removal and office were in need of being done. All contracts were addressed, renewed or altered. Office staff was put to seasonal due to Detroit Beach Finances. The president will VOLUNTEER time to operate the office.

Talk of community volunteer is continuing. The neighborhood needs a lot of work and we need volunteers to do it. The only way to get the volunteers to get park repairs done is by reaching out.

In a meeting, that occurred quite a few months ago, two homes were due to be condemned. A follow up was done. The two homes are now in the hands of the attorneys and courts and it could take another year before they are knocked down and removed. Nick boarded up the one home for safety purposes.

The website was discussed to have it made more user friendly. Spoke with the web designer, and she began work and stated it would be up and running soon.

Although, pricing out a bathroom for the office was discussed at the previous meeting, it will be put on the back burner. The bathroom at this juncture is more o a want than a need. We first have to focus on the repair of our parks.

Finances- Our financial reports and budgets are a continued work in progress. We will be eliminating mailing payments and stream lining them into auto pay.  No purchases are to be. made without the approval of the treasurer. All have approved the budget and financial reports.

Building,  Maintenance and Grounds- Repairs were done to some signs and a fresh coat of paint was added. We have been looking for a plow truck and didn’t find one in our budget. A new regular work truck will be purchased for the neighborhood. A vote to raise the amount to purchase truck was proposed and voted on, all were in favor. Mr. Spear volunteered to fix a guardrail at 10th st. Tiger Carroll assisted with the repair. Bronson Park has a flooding issue and requires a french drain. Mr. Spear has volunteered to take on the task of completing the large task of correctly installing the french drain for the community. Park signs will be put at every park. Parks all require more mulch, new wood, new tables, benches, paint, repair of equipment. We are kicking off a park revitalization committee. Volunteers will be needed and sign up sheets will be made in the office as well as on FaceBook. Discussion to turn the hockey area into a multisport area was agreed upon.. There was a water leak in Bronson park. It was repaired. Many signs in the neighborhood have to replaced and they have to be actual street regulation.  All asphalt surfaces need repair, sealed or both.

Halloween- Decorations will begin to be put out. Trick or treating  will take place in the pavilion this year. Frank, Nick and Victoria will begin adding decorations. Donuts, Cider,  and other treats will be purchase. Kerri, one of our residents, has been on her phone pricing out donuts.

New Business- Park Beautification and repairs will begin now but really kick off in spring of 2022. We need to work on volunteers. Working on creating a cost effective but attractive fencing system for the parks. We need to price out paint for structures and stationary table and benches. Discussion of color for our neighborhood took place. A motion for what Colors was made and voted on and approved. The colors will be royal blue with accents of gold. Flood gates will remain unlocked unless there is a reason to lock them. Nicole and Nick have keys. Railings along Edgewater will be repaired with extra  guard railing. All guard rails will be painted white. More mulch will hopefully be able to be dumped sometime in spring around the play equipment. Stationary benches and tables will be lifted, repaired or replaced. Security cameras are being installed.